DI is currently working on projects designed to improve oil recovery from the older fields. These projects may involve some form of improved waterflooding, use of fluids that can lower residual oil saturation, or use of processes that depend upon gravity forces. The following are examples of ongoing or recent projects.

DI has worked with Grand Resources, Inc., Tulsa, for a number of years in the development and application of horizontal well technology for the improvement of oil recovery from old oil fields in Oklahoma. DI evaluates prospects from a reservoir standpoint and Grand uses its own equipment and personnel to drill and complete wells. Grand utilizes a low cost rotary steerable system to drill short radius horizontal laterals out to 1000 ft. Outstanding success has been achieved in oil fields that have been essentially abandoned after conventional primary and secondary recovery operations.

Plans are underway to inject nitrogen into the crest of a structure that contains significant closure. Modeling studies indicated that a gravity stabilized gas injection process could increase recovery from this old oil field that had been previously depleted using conventional technology.

Start-up of a waterflood in a West Texas carbonate reservoir is now underway. DI had earlier designed patterns and predicted the recovery from the field. The early responses are favorable.

Testing of nitrogen injection into an extremely tight sandstone reservoir is under way. Waterflooding has not been successful since it has not been possible to inject a sufficient amount of water into the formation below the fracture-parting pressure. Modeling studies indicate that gas can be injected into formation to pressurize and to displace oil through the formation.

DI, in cooperation with Reservoir Solutions, Inc., is designing a surfactant flood project to be implemented in a mid-continent sandstone reservoir. This project takes advantages of the lessons learned by the industry in the 1970s and 1980s. 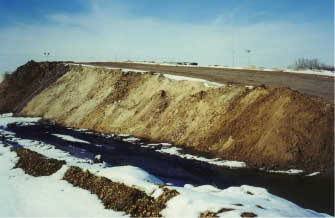 Dr. Dauben led an international group on a tour of cold production facilities in Canada. The figure shows a large sand pile in the Lloydminster area where a 11 API gravity oil is being produced using cold production methods. Production of such a heavy crude oil is made possible by the co-production of sand. The produced sand is accumulated in a large pile, and the residual oil slowly accumulates at the base. The sand is eventually used in the summer months for the building of roads. Cold production has been highly successful in Canada and Venezuela as a means of increasing heavy oil production. In Venezuela, horizontal wells are used to produce the heavy oil using completions designed to minimize sand production. 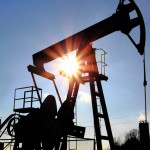 Dr. Dauben also led a group on a tour of some of the major CO2 facilities in the United States and Canada. CO2 flooding is an especially attractive process for improving oil recovery because of improvements in technology and technology enhancements which make it economically possible to extract CO2 from various impure flue gases. CO2 sequestration is also expected to become increasingly important with time. This process involves the injection of a previously vented CO2 stream into oil reservoirs to recover additional oil and at the same time reduce the amount of greenhouse gases that had been vented into the atmosphere. The major natural sources of CO2 in New Mexico are now being rapidly depleted. The figure shows a large pumping jack in a major CO2 flood project.